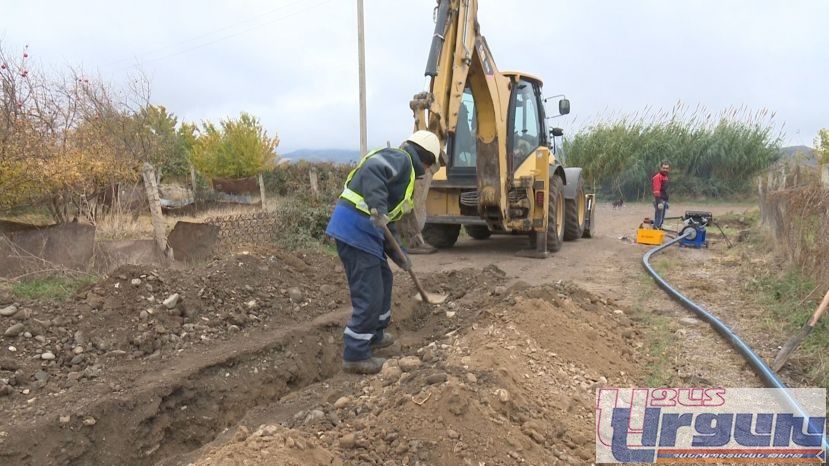 Construction machinery in Ughtasar has not been silent for several months:  long-awaited drinking water reaches the village. According to the community leader Manvel Petrosyan, the problem of Ughtasar is solved.

It is especially felt in summer. “Often this is the main topic of disputes, as some have to bring water from their neighbors. Taking into account that the main occupation of the population is horticulture and the cultivation of vegetable crops, the lack of water is felt very much in Ughtasar. I believe that once the water issue is resolved, the population growth rate in the community will be significant, as people will easily solve their bread problem,” said M. Petrosyan.

Ughtasar is one of the liberated settlements of Askeran region. The village, which was populated in 2002, is flourishing day by day; the community now has 68 households and 340 inhabitants, but the water system hastily built in those years is only partially operational. According to the builder Borik Hakobyan, at the moment the water is reaching the village with a new 6-kilometer pipe. The project had engineering and design difficulties because it only had a 13-meter difference from the source to the village, and in this case the work had to be done very skillfully to get a normal amount of water to the village. I must say that we have succeeded, and that the water reaches the village in sufficient quantities. So far, the water is supplied by the old water network, and today the villagers are using it fully.

Speaking to us, Borik Hakobyan made it clear that he was doing his job with double responsibility in Ughtasar, as he was honored to participate in the liberation of the village as a deputy commander of the 32nd Battalion in Askeran. He reminds that the work is done in the border community where everyone cultivates the land. “We are trying not to cause any problems for the villagers, especially when crossing rural roads. The biggest problem is that the old water network was built without a project, and now we have trouble understanding where each pipeline is going. We ask the villagers, we cooperate with the head of the community, we manage to do the work so that the villagers have no problems,” said B. Hakobyan.

The water system of Ughtasar is being built with funding from the Hayastan All-Armenian Fund's Toronto affiliate. Mounting master Zeus Nazaryan assures that the water network is constructed with high quality pipes and modern equipment.  He guarantees that the network will last long. “I would like to say that we select high quality details and organize the work in sequence. Before filling, we check the resistance of the pipes, making sure that the connections are made correctly. "

After the inland waterway, the builders will build a 100-ton pond at Ughtasar peak. According to the builder, the pumps will raise the water into the pond, which will be gravity-fed water supply to the community. “In this area, winter is not very severe, and I think we can continue to work in winter. Anyway, in the summer of 2020 we will complete the implementation of the project. "

People in Ughtasar are hopeful that 24-hour water will change the life of the village. According to the community leader, resettled families are the first to pay attention to infrastructure. He is confident that in the presence of water, many will settle in the liberated Ughtasar. “I think all the border and liberated cities and villages should be populated. I am convinced that this is how we will conceive our victory and the victory of our combat friends,” said M. Petrosyan.

Contrary to expectations, since April 2016, Ughtasar has adopted new families - housing construction continues. And in 2018, once again sponsored by the Hayastan All-Armenian Fund's Toronto affiliate, the village had a modern school.